Edit
watch 02:34
Fire Emblem Warriors: Three Hopes - The Loop
Do you like this video?
Play Sound

Workers are abandoning the town of Edgewater. Reed Tobson, Edgewater's administrator, wants to force these deserters to return to town by shutting off their power.

Comes Now the Power is a main quest in The Outer Worlds.

Workers are abandoning the town of Edgewater. Reed Tobson, Edgewater's administrator, wants to force these deserters to return to town by shutting off their power. On the other hand, Adelaide McDevitt pleads for the Stranger to spare her band of deserters and divert power away from the Edgewater cannery instead.

This quest is received when the Stranger talks to Reed Tobson as part of Stranger in a Strange Land. Reed will ask them to assist with convincing a group of deserters who are camped out at the Botanical Labs to return to Edgewater by cutting off the power supplied to the labs by the local Geothermal Power Plant. Although he would like both the deserters and their leader, Adelaide McDevitt, to return to the town, he will settle for just the return of her followers. Parvati Holcomb will offer her assistance with the mission, as her father told her all about the power plant, and Reed Tobson will allow her to leave Edgewater and join the Stranger, should they desire her assistance. Reed will also provide the Stranger with a Geothermal Passcode that they will need to enter the plant.

If the Stranger recruits Parvati as a companion, she will prompt a conversation after leaving Reed's office. Speaking to Parvati reveals that she is conflicted about the task which Reed has asked them to undertake as she knew some of the deserters prior to their desertion and believes them to be decent folk. She suggests seeking advice on the situation from the town's vicar, Maximillian DeSoto.

Vicar Max is located in the Vicarage, on the east side of town. Speaking to him per Parvati's suggestion is entirely optional.

If the Stranger chooses to ask Max for his advice, he will ask them whether they believe that choosing to forsake the safety of Edgewater's walls sounds like a responsible life choice. His advice, should the Stranger be wanting to save as many people as possible, is to divert the power to Edgewater and convince the deserters to return home. Max will also tell the Stranger to be cautious on their way to the geothermal plant, as it is not as safe as one might assume.

During the conversation, Max may also ask the Stranger for assistance in retrieving a heretical book, starting the quest, The Illustrated Manual.

Speak to the deserters before going to the power plant (optional)[]

Speaking to the deserters prior to going to the power plant as requested by Reed is also optional. The deserters are camped out at the Botanical Labs in the north of Emerald Vale. Their leader, Adelaide McDevitt, is located in the greenhouse in the center of the lab. She is initially welcoming of the Stranger but becomes hostile upon learning that they have been sent to her by Reed and that they plan to cut off the power to the botanical labs. If the Stranger tells her of their need for a power regulator, Adelaide will tell them that the Saltuna Cannery has a regulator which they can take if they choose to divert power to the Botanical Labs rather than to Edgewater.

Divert power from the geothermal plant[]

The Geothermal Power Plant is located south of the Botanical Labs. It is surrounded by a security fence and guarded by hostile automechanicals. There are two gaps in the northeastern and northwestern part of the fence which can be used to enter the area.

The automechanicals in the plant have been programmed to target all intruders. However, they can be reprogrammed to target one another instead using the Behavior Control Terminal located in one of the upstairs control rooms. The terminal is locked and requires Hack 63 or Chester's Passcode to access. The latter is received by speaking to Chester Higgins who can be found in the plant's geothermal core.

Divert power from the geothermal plant[]

The power from the geothermal plant can be diverted by using the terminal in the main control room which is located to the right of the main entrance and reception area. If Parvati is a companion, she will stop the Stranger for a conversation just before they reach the terminal. If asked for her opinion, she will say that she thinks cutting off Edgewater's power would be cruel and harm innocent people. She notes that Adelaide delights in Edgewater's suffering and asks whether the Stranger is alright with being a party to that kind of hatred. Parvati will remain a companion regardless of the decision made.

The Stranger can then use the terminal and choose to redirect power either to Edgewater or the Botanical Labs.

Divert power to the Botanical Labs[]

Diverting the power to the Botanical Labs will allow the Stranger to return to the Saltuna Cannery and take its power regulator. Cutting off power to Edgewater will cause many of the doors in the town to seal up, blocking off access to buildings like the Constabulary, Edgewater General Store, and Sick House.

The power regulator is located in the Saltuna Cannery's basement where Reed is waiting for the Stranger. He is furious at the Stranger's decisions and says that he has ordered the guards inside the basement to fire on them. Reed can be convinced to order the guards to stand down with Intimidate 30. Otherwise, the hostile guards in the basement must be killed before one can take the cannery's power regulator which is located at the far end of the room.

Exiting the conversation with Reed will complete the quest.

Diverting the power to Edgewater will allow the Stranger to return to the Botanical Labs and take its power regulator. The deserters will be clustered around a campfire when one returns and Adelaide will be downstairs near the regulator.

Adelaide will confront the Stranger and call them a snake. She asks them why they chose to cut power off to the Botanical Labs, to which one can choose one of several responses. If the Stranger tells Adelaide that Reed needs his people back, she will tell them that they can go convince the rest of the deserters to return to waste their lives in the cannery, but she will not return to Edgewater while Reed Tobson is still in charge. The Stranger then has the option to offer to deal with Reed in exchange for her return to the town. Adelaide is open to this offer and doesn't care whether Reed is killed or convinced to leave, as long as the two of them do not have to share the same four walls together.

If the Stranger chooses to not replace Reed with Adelaide, they must speak to Thomas Kemp and Grace Romero who are standing near the campfire outside. While both Thomas and Grace are amenable to returning to Edgewater, they are hesitant to do so as this would mean that Adelaide would never forgive them. If one is planning to replace Reed with Adelaide, the deserters should not be convinced to return to Edgewater until Reed has been convinced to step down. Otherwise, tell both that they are better off in Edgewater and they will return to the town.

Return to Edgewater and speak to Reed Tobson. While he is disappointed that Adelaide has not returned, he is satisfied with the return of his workers. As a reward, he authorizes the Stranger for a discount on all official Spacer's Choice products, completing the quest.

If the Stranger diverts the power to Edgewater but wants to change the town's leadership, they have two options: kill Reed or convince him to leave. Both options require returning to Reed's office in the Saltuna Cannery. If one chooses to kill Reed, the two corporate guards in his office will also need to be killed, as they will turn hostile.

The peaceful route requires Persuade 10 and begins with the Stranger telling Reed that Adelaide will not return to the town while Reed is still there. However, Reed is unwilling to just leave, as the stewardship of Edgewater has been entrusted to him by Spacer's Choice. With Persuade 10, the Stranger can convince Reed to step down by telling him that Adelaide has found a way to grow food and will come back to Edgewater if he does so. However, Reed will not be convinced without evidence. One can then either tell him the truth about Adelaide using human corpses in her fertilizer, or use Lie 20 to convince Reed by telling him it involves complicated math. Either option will lead Reed to acknowledge that Adelaide would be a better leader of Edgewater than him and standing down from his post.

Regardless of whether Reed is removed peacefully or by force, return to Adelaide to tell her news. She will give the Stranger her watch which she describes as a ransom, completing the quest. 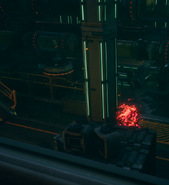 Several of the Automechanicals fighting each other after having optionally reprogrammed their behavior
Русский
Community content is available under CC-BY-SA unless otherwise noted.
Advertisement