Hiram Blythe, also know as "the Broker", is an information broker who runs Devil's Peak Station on Monarch. He has barricaded himself in the broadcast center at the top of the building, hiding from the marauders who have broken into the station.

Hiram has played a very important role in the history of Monarch. Making use of his knowledge, he informed Sanjar Nandi and Graham Bryant regarding the intention of The Board to leave Monarch, aka Terra 1, and how they could bypass the laws to appropriate the planet legally.

Hiram hired the Corporate Compliance Crew to protect him from marauders.[1] However, as he only specified that they were to kill anyone coming out of the tunnels beneath the station and not the mountain path, marauders were able to enter the station unimpeded via the latter route.[2] 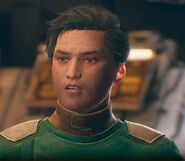 Retrieved from "https://theouterworlds.fandom.com/wiki/Hiram_Blythe?oldid=34352"
Community content is available under CC-BY-SA unless otherwise noted.