The Mechanical Sentry is an automated defense robot. They are heavily armored and shoot bolts of plasma.

They are heavily armored being as such they are relatively safe against bullets although while using TTD bullets can blind and stagger them.

They are relatively weak against single and double handed melee attacks as well as TTD bullet strikes.

The best way to punch through their armor is to rely on weapons that deal more damage per shot, rather than weapons with higher DPS. 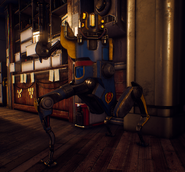 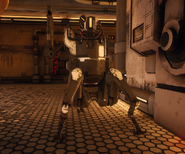 Sprat Exterminator - UDL paint
Add a photo to this gallery
Retrieved from "https://theouterworlds.fandom.com/wiki/Mechanical_sentry?oldid=32597"
Community content is available under CC-BY-SA unless otherwise noted.