Edit
watch 02:40
World of Warcraft: Dragonflight - The Loop
Do you like this video?
Play Sound

Moon Man is the company mascot for Spacer's Choice.

Acting as the mascot of Spacer's Choice, the Moon Man is able to be seen undergoing a variety of roles, acting as both an indicator of success and wealth, but also as worker and laborer positions, embodying both the rich and poor of Halcyon. The Moon Man's iconic round and craterous head is a popular piece of headgear among colonial citizens. Helmets based on Moon Man's head can be purchased from certain vendors.

Holding Adrena-Time in a Gorgon advertisement. 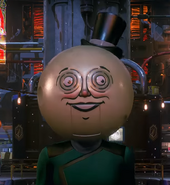