Canid's Cradle
The Commuter
Pay for the Printer
Sucker Bait

“
If it weren't for her, I'd wager the Iconoclasts would've died off a while ago.

Zora Blackwood is a member of the Iconoclasts and, alongside Graham Bryant, is one of the group's de facto leaders.

Before joining the Iconoclasts, Zora lived in Cascadia and worked for Rizzo's in the bottling plant as a doctor. She was an excellent employee and described as a "top-notch sawbones with a good head for working under pressure".[1] Following the enactment of the Hazard Clause, Zora became suspicious that Rizzo's management was not telling their staff the entire truth.[2] When the final evacuation procedures went south and the pterorarys which were being transported off-world broke out of their cages, Zora and many other Rizzo employees were left behind.[3]

Zora and those left behind survived in Cascadia for a time until the town was threatened by marauders and they had to flee the town.[4] Zora was the only survivor of this escape, forced to climb a chasm to escape from the marauders, after her companions including Cecil McClure were killed.[5]

She joined Graham Bryant and helped start the Iconoclasts, patching up those who got wounded while fighting for their cause.[6] Nearly every member of the Iconoclasts owes her their life in some way.[7] However, her methods of operation including her desire to impose some form of scheduling on the faction, has ruffled some feathers.[8] This has led to conflicts between herself and Graham Bryant, the latter being more focused on spreading the message of Philosophism, considering Zora's concerns about food and medicine to be a distracting attachment to corporate materialism.[9] 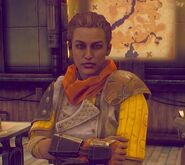 Retrieved from "https://theouterworlds.fandom.com/wiki/Zora_Blackwood?oldid=34026"
Community content is available under CC-BY-SA unless otherwise noted.